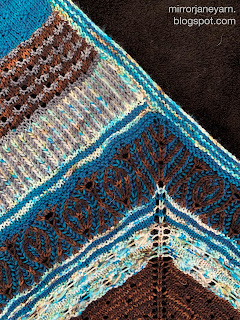 The first Big Thing I have gotten to knit for me! (Let’s ignore the Technicolour Dreamcardigan that languished on the needles.)

To create your own piece of fabulousness, take your favourite sock yarn in four stunning colours, add lace, add brioche, add some interesting construction and wave them around at someone who wants to buy you a present. Preheat during transit, then allow to incubate on top of your yarn stash until there’s a good amount of holiday time to really enjoy casting on. Knit happily for another four months while you completely fail to watch TV, block, fail to be capable of taking photos of such a huge thing without it looking dumb and instead start wearing immediately. Give it a shot, your results may vary.
I think mine were absolutely brilliant. I put this on every excuse I can make up and only feel slightly silly that there is no reason to wear a winter shawl in this climate, and only vaguely guilty about the lack of photos. 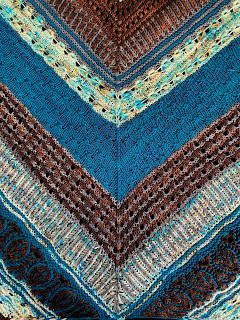 Bis-sock is one of my absolute favourite yarns, and now definitely not just for socks. So soft and squishy and knits perfectly, it’s perfect. I’m now the weirdo who responds to “Nice wrap” with “Ermagerd! It’s amazing you HAVE to SQUISH IT!” I’m lucky my local doesn’t carry the full range of speckles and tonals, the self-striping has already done enough damage to my wallet and stash space. I ordered the Triptyque kit from the Biscotte website, which includes three full size skeins (Chocolat, Lagon and Terre & Mer), one half skein (Gris-Gris) and the Triptyque shawl pattern. 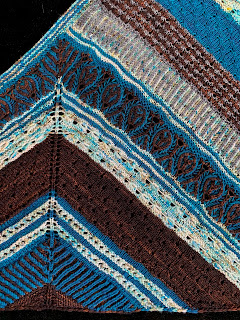 I managed to get through an entire section before making a mistake, roughly 12 rows. This was certainly not to be the last, despite much referencing of Instagram photos. Such is to be expected when being as wonky as I am faced with an adventure such as this pattern. There was barely time to get the hang of the tricky new lace stitch before plunging back into some refreshing brioche then traversing something loopy in speckles. But the pattern is beautifully written and all manner of dumb is on me.

I’m a bit of a stickler for symmetry, so I complicated a few of the sections further by insisting on using mirrored decreases for the lacy bits. These are sadly not recorded and I have no idea how half of them happened. I must have googled how to slip-slip-purl at least 37 times and found the wrong two videos first every time. (If only there was some sort of tech that let us keep our place on the internet...) Thankfully I did make some videos when I figured out the one-pass increases and decreases, so they have officially helped at least one knitter! 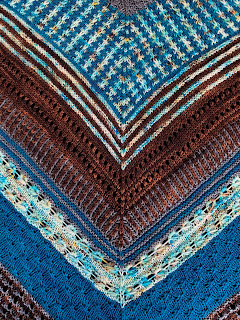 This was also a great chance to test a new brioche technique I’d been thinking of, which I should really make another post about. I’ve ranted enough about one-pass brioche, but I thought it could work using the Portuguese method to work the purls. Long story short, it totally works and is totally awesome and I’ve stolen a bunch of earring hooks to make (and lose a bunch of) knitting pins.

So, please enjoy the small snippets of shawl I have managed to get photos of, and if you're up for something beautiful and absolutely fascinating to knit, I'd highly recommend giving this pattern a shot.